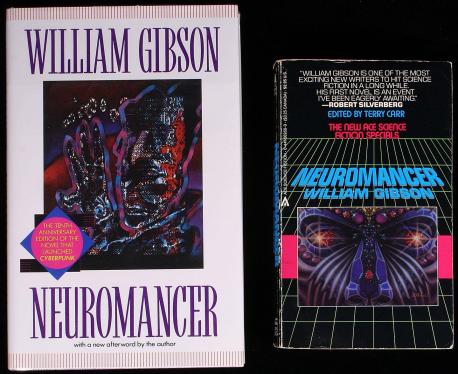 William Gibson is one of the fathers of what has been called cyberpunk literature, a sub-genre of the science fiction literary form that has been overwhelmingly influential in the twentieth and twenty-first century. It has even been claimed that William Gibson's works, similar to George Orwell or Bradbury, have predicted changes and attitudes in society and technology, which may go some way to explain just how popular they are.

In collecting terms, his catalog occupies that middle ground between contemporary taste and lasting legacy. His earliest work, The Neuromancer and Mona Lisa Overdrive were published in the mid-eighties, while his current work is still being published to this day, as he is an active writer. As a rule of thumb, apart from breakaway authors such as JK Rowling, books start to accrete value once they are past the forty-fifty year mark, so his early novels are starting to see some genuine rise in market value, which has only been maximized by his uniquely somewhat prophetic status.

The Neuromancer for example, is readily available now at many auction sites both in its original first printing hardback, as well as in unedited galley proof editions and mass market paperback. What makes this book so intriguing is that the galley proofs and the first edition hardbacks are already valued at near or around a thousand dollars (sometimes triple so, and even the mass market paperbacks are starting to rise in value?

Why would this be, when every collector knows that the mass market paperbacks are usually the signs of the end of a books profitability? This is because ACE publishers, who widened this particular books market in 1983 never authoritatively signaled its reprint numbers, making the first true impressions of the mass market hard to detect, and thus, valuable. If you are lucky to own one of the rare mass market paperbacks of the Neuromancer and its printing numbers sequence 10, 9, 8, 7, 6, 5, 4, 3, 2, 1 then you are lucky enough to own a 1st impression print, and even that paperback is worth a few hundred dollars!