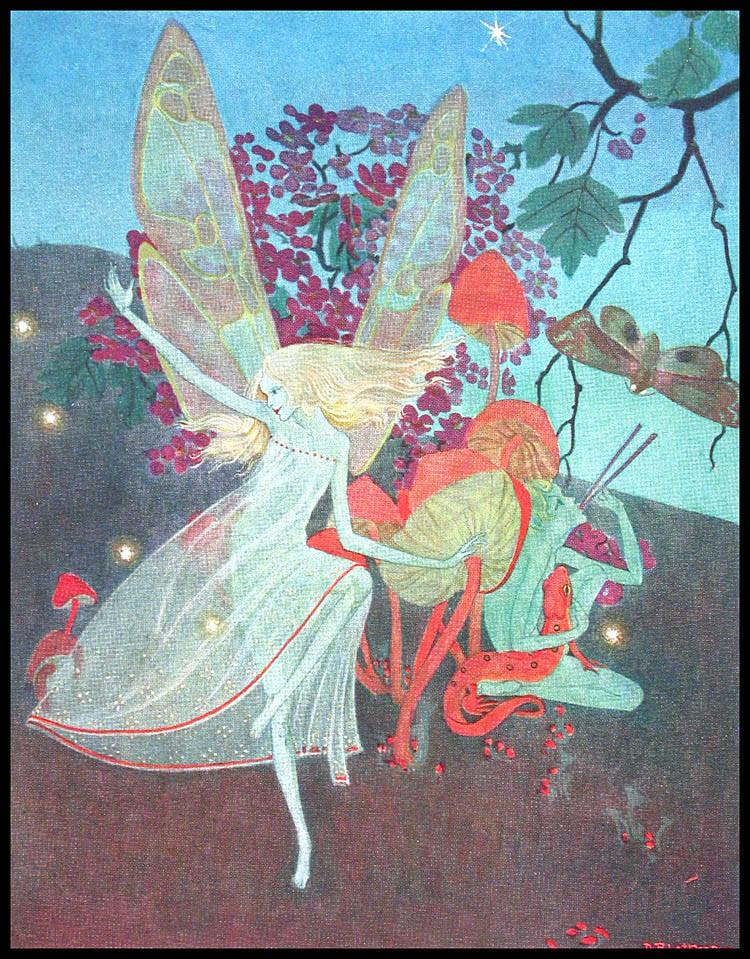 Walter De La Mare's imaginative work in poetry, short fiction, and novels made him one of the 20th century's most celebrated and influential authors. His delightful and often frightening children's stories are a nostalgic journey through a child's mind as it explores and imagines a world rich with the possibility adventure, supernatural creatures, and beauty.

As a writer known for his work for children, many of De La Mare's books were illustrated. Although he himself disagreed with illustrated novels-he saw illustration as a crutch for weak writers who could not adequately communicate with their words alone, we can enjoy some of the beautiful illustrated editions available. For instance, a first edition of De La Mare's poetry anthology Songs for Childhood (Longman Green and Co: London 1902) with a frontispiece of dancing fairies by Robert Doyle is available for two to three thousand dollars; a 1923 edition illustrated by Estella Canziani sells for about one-tenth of that. De La Mare also signed several copies of this latter edition, which command a slightly higher value.

For those who would prefer to collect De La Mare's horror stories, which were a major influence on some of the most prolific horror writers of the 20th century including H.P. Lovecraft, they are also available at a range of pricepoints. De La Mare's possession story The Return (Edward Arnold: London, 1910) is valued from five hundred dollars to almost thirty-five hundred dollars depending on the quality and edition (a 1940 edition by Ayer Books fetches top price).

de la Mare, Walter. The Three Mulla-Mulgars. Duckworth, London (1910). With a frontispiece and one plate, in color, by J. R. Monsell.

de la Mare, Walter. Down-Adown-Derry. Constable, London (1922). Illustrated by Dorothy Lathrop with frontispiece and two other coloured plates. Many illustrations of faries, witches and dreams in the text. 325 numbered and signed copies.

de la Mare, Walter. Come Hither: A collection of rhymes and poems for the young of all ages.. Constable, London (1923). Woodcut vignettes and full-page illustrations by Alec Buckels.

de la Mare, Walter. Seven Short Stories Chosen from 'The Connoisseur and Other Stories', 'Broomsticks and Other Tales' and 'The Riddle and Other Stories'.. Faber and Faber, London (1931). 150 copies signed by the author. Frontispiece plus 7 further full colour lithographs and two black and white illustrations by John Nash.

de la Mare, Walter. This Year: Next Year.. Faber and Faber, London (1937). Illustrated throughout with colourful borders and chromolithograph plates by Harold Jones. 100 numbered copies signed by both author and illustrator.