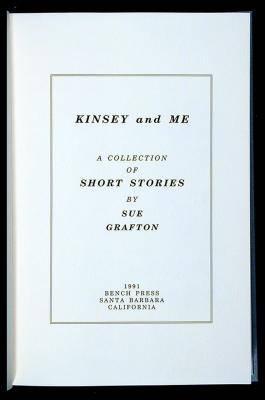 Sue Taylor Grafton is best known for her mysteriously creative writing style first recognized by the public through her alphabet detective series during the early 1980's. Prior to success with this series, she wrote screenplays for television movies. Grafton's penchant for clandestinely suspenseful writings was born during her turbulent childhood with alcoholic parents and later through a tumultuous divorce and custody melee with her first husband.Thoseexperiences became the premise of her journey as a mystery novelist. Each of Grafton's novels earned recognition and validity over the years making it a must have collectible series and making the first editions of each series novel a must have for collectors.

The first edition of "A" is for Alibi, Grafton's first renown work, has seen much success on the auction block being sold for $1,250 in April of 2012. This first edition copy, printed with andquot;0482andquot; on lower front flap was in excellent condition. Grafton's success with this series marked the pinnacle of her writing career. It is imperative for booksellers and buyers to nail down first edition identification. Grafton published her first alphabet series book in 1982 with Holt, Rinehart and Winston. "A" is for Alibi and "B" is for Burglar both bear this imprint. After B is for Burglar was published, Holt Rinehart and Winston separated into two companies. The main publishing company, Henry Holt and Co., continues to publish Grafton's work.