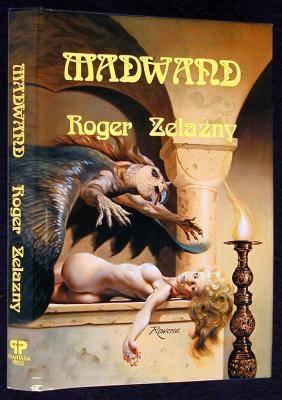 Little can be said in the realms of science fiction and fantasy without some reference to Roger Zelazny, one of the forebears of the modern fantastical genre. Unlike the predecessors who had gone before him -- the Tolkiens, the CS Lewis's, the Howard's and the Fritz Lieber's -- Zelazny managed to meld together the true pulp excitement and dazzling fabulation with the more structured elements of fairytale-adventure in the more 'epic' fantasists of yesterday. Instead of the split between the 'high fantasy' of elves and dwarves, and dragons and so on and the 'low' pulpy fantasy with no real deeper emotional hold but plenty of action, Zelazny showed a style that could marry both.

One of Zelazny's seminal works included Lord of Light (DoubleDay 1967) an almost metaphysical piece written as if Phillip K. Dick had written fairytales. This tome has gone down in SFF history by showing just how envelope-breaking an SFF novel can be, and what subjects 'can' be tackled in the genre (answer: any!). Widely cited by many fantasy authors of today as a source of inspiration (GRRM, Rothfuss ,etc), the Lord of Lord can be found, in true first condition, for thousands of dollars. For a true collector however, the very best possible edition to own would probably be one of the signed presentation copies that have made their way into the public domain from private collections and the publishing houses. Some of these, with their unique signatures, notes, and slipcases in a very find condition, have been known to fetch over five thousand US dollars!

Another work of Zelazny's to consider in his The Chronicles of Amber series, considered one of the first true 'urban fantasy' sagas, with echoes recurring throughout the later genre from Gaiman to Mieville! The first book of this series, Nine Princes in Amber, is the most collectible, with a true first (signed) going for a few thousand US dollars. If you are happy to accept unsigned, then the characteristic blue and off-white covered first edition can be found for as little as $500.

Happily, however, there are many collectible items to choose from in Zelazny's repertoire. Roger Zelazny was, at his core, an SFF writer, and so wrote many short stories and novellas throughout his career on a startling array of different topics and genres. He won the world Hugo award six times (and was nominated no less than fourteen times). If you are a collector of SFF, and fancy a piece of the genre's history - then consider purchasing a copy of Creatures of Light and Darkness (Faber and Faber 1970) or Rose for Ecclesiastes (London: Rupert Hart-Davies 1969) - both of which are fantastically important milestones in their field, and also very affordable at less than $500!

Zelazny, Roger. The Doors of His Face / The Lamps of His Mouth and Other Stories. Doubleday, New York (1971).

Zelazny, Roger. Ten Tales. Cahill, Huntington Beach (1994). 250 numbered copies and 26 deluxe copies specially bound; Designed by Dennis Guzman and printed by Kenneth L. King; Includes Bookscout by Dunning, The Colonel's Wife by Dubus, The Pale Silver Dollar of The Moon by Ellison, Prince of Kistler Coke by Barrett, Ghost Caper by Hornsby, Everybody Plays the Fool by Lansdale, The Unwritten Law by Vachss. Signed by all ten authors as well as by Lawrence Block and Poppy Z.