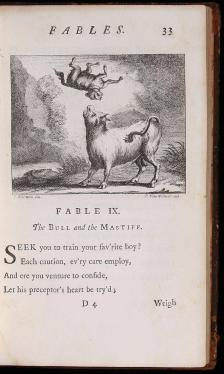 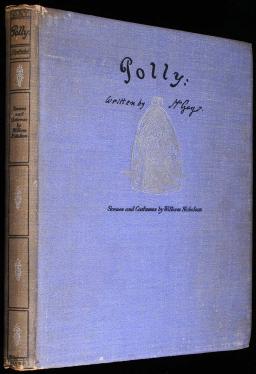 Gay, John. The Wife of Bath. London (1713). A Comedy; As it is acted at the Theatre-Royal in Drury-Lane, by Her Majestys Servants.

Gay, John. The shepherds week. London (1714). In six pastorals; including an engraved frontispiece and six other plates

Gay, John. Trivia. Bernard Lintott, London (1716). or, The Art of Walking the Streets of London. By Mr. Gay; First edition 250 copies; with a vignette title and 3 engraved vignette head-pieces; with the engraved head-piece on p. 1 (theStreet Scene) and elaborate engraved ornaments at the beginning of Book II (p. 21) and Book III (p. 53)

Gay, John. Fables. London (1727). Invented for the Amusement of His Highness William, Duke of Cumberland; Engraving to title page by P. Simms .

Gay, John. The Beggar's Opera. Printed for John Watts, London (1728). As Acted at the Theatre-Royal in Lincolns-Inn-Fields; The Second Edition: To Which is Added The Ouverture in Score; And the Musick prefixd to each Song.

Gay, John. The Beggars Opera. John Watts, London (1729). As it is acted at the Theatre-Royal in Lincolns-Inn Fields; The Third edition: with the Ouverture in Score, the Songs, and the Basses, (The Ouverture and Basses composd by Dr. Pepusch) curiously engravd on Copper Plates / Polly An Opera Being the Second Part of The Beggars Opera 2nd edition London 1742

Gay, John. ACHILLES. Printed for J. Watts, London (1733). AN OPERA; As it is Performd at the Theatre-Royal in Covent-Garden.

Gay, John. The Beggars Opera. John Watts., London (1735). As it is acted at the Theatre-Royal in Lincolns-inn-fields; The Third Edition: To Which is Added The Ouverture in Score; and the Musick Prefixd to Each Song

Gay, John. Poems on Several Occasions. H Lintot. J and R Tonson and S Draper, London (1745). 2 volumes; Illustrated with a series of engraved plates after P. Fourdrinier and complete with head and tail-piece vignettes to each section.

Gay, John. Plays. J. and R. Tonson, London (1760). Written by Mr John Gay viz; The Captives, a Tragedy, The Beggars Opera, Polly, or, the Second Part of the Beggars Opera, Achilles, an Opera, The Distressd Wife, a Comedy, The Rehearsal at Goatham, a Farce to which is added an Account of the Life

Gay, John. The Beggars Opera. Strahan,Lowndes,Caslon,Griffin., London (1771). The engraved device of theatrical masks and musical instruments on the title page is by George Romney

Gay, John. Beggar's Opera. William Heinemann, London (1921). To which is Prefixed the Musick to each Song; 430 copies on hand-made paper; 8 costume designs in full color, tipped onto blue paper, other decorations and textual art

Wright, W.H. Kearley. Biography and the Fables. Frederick Warne and Co, London (1923). Biography Edited by the late W.H. Kearley Wright; Illustrated with 68 Wood Engravings from drawings by William Harvey; 250 numbered copies; Concludes with Prefatory Note to the Bibliography' and Chronological List of the Editions of the Fables, and of the Works Containing the Fables'.

Gay, John. Rural Sports. William Edwin Rudge, New York (1930). together with the Birth of the Squire and the Hound and the Huntsman; 225 copies; Signed frontis by Gordon Ross; Five Illustrations colored by Gordon Ross