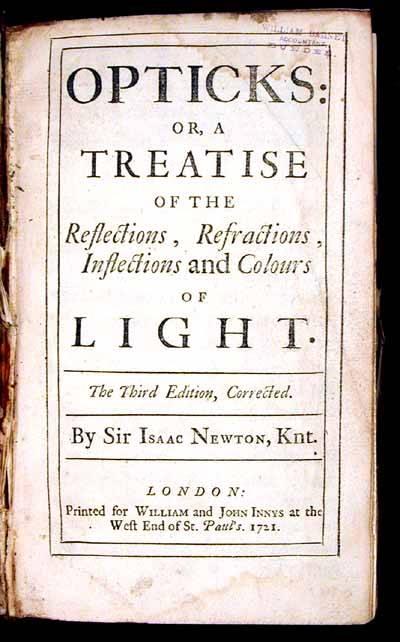 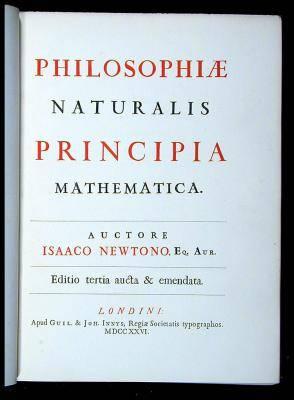 Every now and again in one's collecting life, there falls upon the antiquarian a hunger for some of the big names of the field. I imagine this feeling is similar to the hunger that strikes a mountaineer at sea-level, or when hearing of a difficult, far-off peak that they still haven't accessed. There can be few such names for the antiquarian book collector that evokes such a hunger than Sir Isaac Newton, one of the foremost scientists of his age, and father of modern scientific method.

Naturally, many of Sir Isaac Newton's original works are held in trust by Universities or museums, given their age and importance. However, there is an opportunity with a figure like Sir Newton that few of the other great names (Descartes, Picasso, DaVinci, Locke, Rimbaud) can offer. Thanks to his patronage by the Royal Society at the time, Sir Isaac Newton's work was well-received, and well-published, meaning that there are indeed early copies still available to the earnest and dedicated collector. Unlike many of his contemporaries, Sir Isaac Newton did not suffer from book burnings and confiscations of his work (partly due to his zealously religious nature, if it was a fairly unorthodox form of Christianity), and so, if you have the resources, you can enjoy owning a copy of his earliest work Optice or indeed his magnum opus Philosophiae Naturalis Principia Mathematica, in their near-original first edition forms!

The Optice is a marvel of a book as well as a subject, covering as it does Newton's study of color, of the reflection, refraction, and diffusion of light, including an early design for a Newtonian telescope (the sort that we use to this day). It features one of the earliest understandings of the workings of the rainbow, and of the color wheel, and is still regarded as one of the most important mathematical additions to the world. A variety of the early editions can be found dating from 1706 instead of 1704 by Samuel Smith and Benjamin Watford of London, and can command from five thousand US dollars on up (depending upon the exact condition).

Perhaps the holy grail for Newton book collectors would be the Principia, originally published in 1687 by the Royal Society alone. This original first edition can indeed be found, but is perhaps prohibitively price. A slightly more affordable edition can be found from the 1713 reprint by The Cambridge University Press.

If both of these tomes are out of your price range, then consider instead the very worthwhile and often over-looked volume of The Chronology of Ancient Kingdoms, published in 1728 by J. Tonson in the Strand, J. Osborn and T.Longman in Pater-Noster Row, London. This very early volume is a collection of histories, maps, and studies of the ancient world by Sir Isaac Newton, and is a collectible bargain at a mere four and five thousand US dollars.

Newton, Isaac. Observations Upon Prophecies Of Daniel And The Apocalypse Of St. John. Darby and Browne: London (1733).