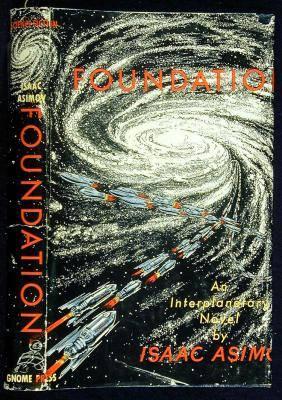 Isaac Asimov is another author who almost single-handedly created a genre of story that, without which, we would not have the writing that we do today. Asimov is regarded as one of the fathers of modern science fiction (along with Arthur C. Clarke, Harlan Ellison and Philip K. Dick), who singlehandedly helped to reconfigure how we think about alien life, future human society, and robots. He was so influential, in fact, that he coined the term 'robotics' and many of his predictions about cybernetics have formed the basis for modern computing.

Isaac Asimov was perhaps the quintessential science fiction writer: with his passion for all things technological, his unusual appearance and his commitment to the future. He was a lifelong Humanist, atheist and sceptic, helping to form the Committee for Skeptical Inquiry which continues to disprove paranormal claims to this day. Apart from his fiction works, perhaps one of his greatest contributions to the world is his Three Laws of Robotics as well as his predictions for the future: including global warming, population management, and technological advances such as computer A.I., and 'Asimov's Ladder' (a form of space transport that is seriously being considered by NASA).

Asimov's greatest work (some would argue his lifetime work) would be the future histories of our galaxy called The Foundation Series, which started as three books in the 'saga' and then were continuously added to throughout his life. What is pertinent for the collector is the fact that they show a window into the formation of the 'Golden Age of Science Fiction' as they were written in the 1950s, right at the birth of the entire genre. The next most interesting works of the author would perhaps be the Robot series (actually a part of the Foundation series, but considered separate from it).

The very first editions of I, Robot were published by the lesser-known Gnome Press of New York, in an attractive red, moody jacket or clothbound hardcover - the front illustration an iconic 'Iron Man' sort of robot (1950). If found in or near good condition, then unsigned, these will be worth somewhere in the region of three thousand US dollars, and worth investing in, as the Gnome Press editions only lasted for a very short window of time. The first edition hardcover of I, Robot from Grayson andGrayson, just a few years later in 1952, falls dramatically in value to around the seven hundred to a thousand dollars region.

For the Foundation Series books we see a similar history, with Gnome Books of New York again being his original publishers. Whilst any hardcover of the first two volumes (Foundation and Empire) are interesting and hold a place in scifi history, it is only the very first printing of these volumes which command the higher prices at auction. These can be distinguished by their (predominantly red) full colour covers as opposed to their (faded-out) black and white cover images. These full-colour first printing, first edition hardcovers are worth anywhere from seven hundred to two thousand US dollars, depending on signature, quality, and preservation.

Asimov, Isaac. Lucky Starr and The Pirates of The Asteroids. Doubleday and Co. NY (1953). Published Pseudonomously By Paul French

Asimov, Isaac. LUCKY STARR AND THE PIRATES OF THE ASTEROIDS. Garden City: Doubleday and Company, (1954).

Asimov, Isaac. Nightfall and Other Stories. Doubleday and Co. Inc. (1969). Twenty Stories With Interesting Biographical Notes By Asimov, All From The 1950S And 1960S Except The Title Story.

Asimov, Isaac. Where Do We Go From Here?. Doubleday and Company, Garden City (1971). Includes Stories By Asimov, Heinlein And Arthur C. Clarke.

Asimov, Isaac. More Tales of the Black Widowers. Doubleday and Co. (1976). Dr A, Paul French, C L Ray; This Contains: Introduction; When No Man Pursueth; Quicker Than The Eye; The Iron Gem; The Three Numbers; Nothing Like Murder; No Smoking; Seasons Greetings; One and Only East; Earthset and Evening Star; Friday Thirteenth; The Unabridged; The Ultimate Crime.

Asimov, Isaac. Familiar Poems, Annotated. Doubleday, Garden City (1977). Poems Included Are: Ozymandias; The Destruction Of Sennacherib; The Vision Of Belshazzar; Alexanders Feast; Antony To Cleopatra; The Angels Song; Boadicea; The Pied Piper Of Hamelin; Bruce To His Men At Bannockburn; Lepanto; The Revenge; The Landing Of The Pilgrim Fathers; On The Late Massacre In Piedmont; The Deacons Masterpiece; Paul Reveres Rive; Concord Hymn; On The Extinction Of The Venetian Republic; Incident Of The French Camp; The Star-Spangled Banner; On First Looking Into Chapmans Homer; A Visit From Saint Nicholas; Old Ironsides; To Helen; Ann Rutledge; The Charge Of The Light Brigade; Maryland, My Maryland; Battle-Hymn Of The Republic; Barbara Frietchie; O Captain! My Captain!; Invictus; The Modern Major-General; The New Colossus; Recessional; Cargoes; Miniver Cheevy; In Flanders Fields; Fire And Ice

Asimov, Isaac. Banquets of the Black Widowers. Doubleday (1984). Aka: Dr A, Paul French, C L Ray; First Printing WithFirst Edition Printed On The Copyright Page; Contains: Introduction; Sixty Million Combinations; The Woman In The Bar; The Driver; The Good Samaritan; The Year Of The Action; Can You Prove It?; The Phoenician Bauble; A Monday In April; Neither Brute Nor Human; The Redhead; The Wrong House.