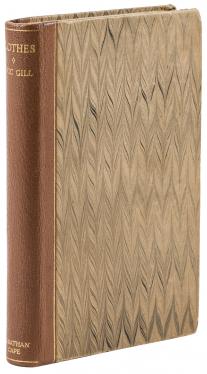 Arthur Eric Rowton Gill is, was, and remains a controversial figure that still inspires much debate in the art world. As a sculptor, printmaker and artist his work is considered some of the finest of the Nouveau-Classicalism that rose with the Arts and Crafts movement. His relief sculptures such as The North Wind or Ariel Between Wisdom and Gaiety, are still considered wonderful expositions of form, seriousness and sensuousness. However, underneath this finery lay a much darker side to the man.

Thanks to the detective and investigative work of late biographer's in the 1980's, it was unearthed that Eric Gill was a deeply torn, and disturbed man. His obvious religious commitment, catholic fervor and gentle depictions of Mother Mary and Child hid an obsessive guilt with sensuality, intimacy, and sexuality. His personal diaries revealed a man who fetishized sex as an act as a part of his faulty moral compass. To the shock of many, it was also revealed that Eric Gill had many extra-marital affairs and abusive relationships - including abuse performed against his own children. How is any to reconcile these two sides of this obviously conflicted, and damaged man?

On one side, the story of Eric Gill is concerned with finery, with exactness, control and elegance. His work as a typeface designer admittedly defined the pre-War age (Eric Gill designed Perpetua, Joanna and the Gill Sans fonts as well as designing the typeface for the London Underground). It is to this work as a designer and illustrator that the collector has to admire. His work has been chosen to accompany some of the finest productions of classical texts, from James Joyce's Ulysses to Shakespeare and Chaucer. Thanks to his very fine illustrative style, and the benefit of him being a typeface designer, Gill has been admired and used by many Fine Print publishers during his life for their select works.

For the dedicated collector, then, no finer work of Gill's could be sought then perhaps his work with the Golden Cockerel Press; and currently there can be found a selection of limited edition framed prints of Gill's illustrations to accompany the characters in the Canterbury Tales (1928). A signed, very fine condition of one of these prints could be worth as much as $1000.

For the collector who may want to reflect on history and the controversy of the man, then they should look towards Eric Gill's seminal work 25 Nudes (Hague and Gill, London, 1938) which is a selection of twenty-five studies that showcase Gill's elegant and sensuous style - evident in his sketches of the artists' models and obviously expressed in his sculpting work. Given what we also know about Gill's personal life; the significance of this obsession is undeniable. A signed Presentation of Limited edition copy of 25 Nudes would be worth as much as $1500.

Gill, Eric. Songs without Clothes. Ditchling St. Dominics Press (1921). Being a Dissertation on the Song of Solomon and Such-like Songs; Together with a Preface by Fr. Vincent McNabb; 240 copies.

Hilary, Pepler. In Petra. S. Dominics Press, Ditchling Press, Sussex (1923). Being a sequel to Nisi Dominus, together with a preface and notes; title-page wood-engraved vignette printed in red plus 8 wood-engravings in text (including capitals) of which six are by Gill and three by David Jones

GILL, Eric. Sculpture. Douglas Pepler, Ditchling (1923). An Essay on Stone-cutting, with a preface about God; Reprinting two essays, the Preface from an issue ofThe Game and Stone Carving, which first appeared asSculpture in 1918; 3 wood engravings by Eric Gill.

Maritain, Jacques. The Philosophy Of Art. Douglas Pepler, Ditchling (1923). With an introduction and title and colophon woodcuts by Eric Gill; 400 copies.

Gill, Eric. Art-Nonsense and Other Essays. Cassell and Co., London (1929). The first use ofPerpetua Type designed by Gill; 100 copies.

Gill, Eric. The Passion of Our Lord Jesus Christ. Faber and Faber, London (1934). ACCORDING TO THE FOUR EVANGELISTS WITH FIVE ENGRAVINGS BY ERIC GILL; Printed by Hague and Gill, High Wycombe; 300 copies; A fine printing of the Passion from Sts Matthew, Mark, Luke and John in bilingual text (Latin facing English text)

Sterne, Laurence. A Sentimental Journey Through France and Italy. Limited Edition Club, New York (1936). Printed By Hand on Hand-Made Paper, the Type Being a New Face Designed Especially By Mr. Gill for This book, and Signed By D. Tegetmeier and Eric Gill; Binding is of Full Winterbottom Buckram, Stamped with a Design By Eric. Gill in Gold, Blue and Red.

Besterman, Theodore. THE TRAVELS AND SUFFERINGS OF JEAN DE BREBEUF. Golden Cockerel, London (1938). among the Hurons of Canada as described by Himself; Illustrated with a double-page wood engraved title by Eric Gill; 300 copies; translated from the French and Latin by Theodore Besterman.