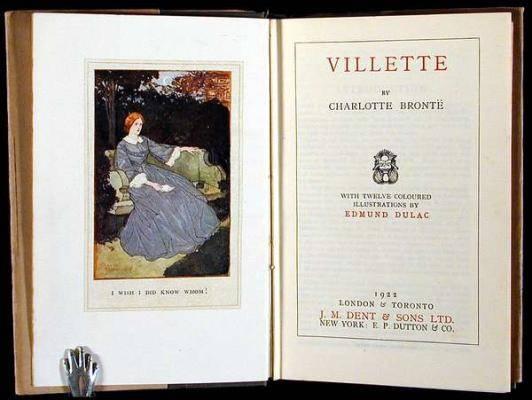 There is something quintessentially English about the Brontes and their work; for many this is what makes their novels still so appealing today, with numerous film and small screen adaptations being seen in recent years. Even now after 150 years their home in Yorkshire remains a very popular tourist destination.

Charlotte was the first of the Bronte siblings to publish her work and that novel, Jane Eyre, remains her most famous and ,for many, best work. Indeed, it regularly features in "Best Novels of All Time" lists. However she had just three of her novels published during her lifetime - Jane Eyre (1847), Shirley (1849) and Villette (1853). With such a limited but famous catalogue of works she has understandably become an extremely collectable author.

For the serious collector, first edition Charlotte Bronte books can be found if they are willing to pay. An original 1847 Smith, Elder and Co. copy of Jane Eyre (published under the pseudonym Currer Bell)is likely to set a buyer back anything between $50,000 and $130,000. Second editions from the following year can be picked up for nearer $10,000.

Because Jane Eyre has remained popular for such an extended period of time there has been a huge number of reprints meaning that twentieth century copies are widely available. A collector might pay significantly less than $1000 dollars for a very early twentieth century edition.

Due to their relative anonymity in comparison, Villette and Shirley are much more affordable. A first edition of Shirley from 1849 for example might be available for $4,000 to $4,500. There are also a huge array of good quality Bronte collections available which may tempt buyers into investing.

Aside from her novels, last year an unpublished short story and letter from Charlotte were discovered and sold behind closed doors for nearly a quarter of a million dollars. With this in mind it is clear that Charlotte Bronte remains an extremely popular cultural figure and as such one who may be considered a good investment.

Bronte, Charlotte. Life and Works of the Bronte Sisters. Smith, Elder , London (1887). Wood-engraved frontispieces and title pages, as well as in-text engravings by E. M. Wimperis; 5 illustrations in each volume (and an additional 3 in vol. 7).

Bronte, Charlotte. The Life and Works of Charlotte Bronte and her Sisters. Smith, Elder, , London (1899). Complete in 7 volumes; With numerous portraits and illustrations, engraved and photogravures.

Bronte, Charlotte. The Life and Works of The Sisters Bronte. Harper Publishers, NY (1899).