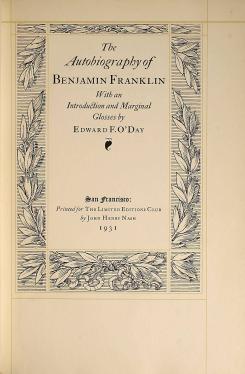 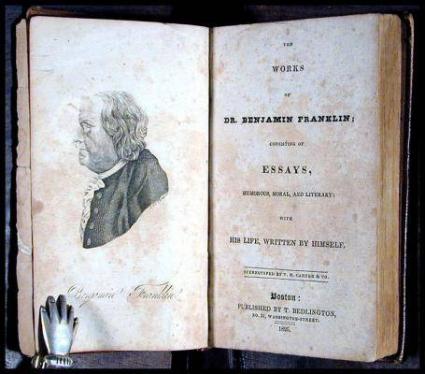 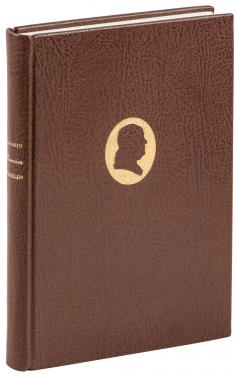 Benjamin Franklin needs no introduction. He is utterly ubiquitous as a cultural touchstone due to his storied and brilliant life. He was one of the founding fathers of the United States of America, a diplomat, a physicist, a scholar of law, and so much more. First and early editions of his work are extremely valuable and highly prized among collectors-partially due to the age of the manuscripts, which date back to Franklin's lifetime in the 18th century.

Because Franklin was such a prolific polymath and writer, collectors have a lot of options open to them. Those interested in his natural philosophy will find a 1769 edition of Experiments and Observations on Electricity, Made at Philadelphia in America (David Henry: London) fetching up to over $3,000. A 1753 edition of the letter in which Franklin recorded his famous kite experiment (C. Davis: London) is valued between $6,000 and $7,000.

I would be badly remiss if I did not mention Franklin's contributions to political philosophy and statecraft. His opinions on issues such as American independence from Great Britain and the French and Indian War were published in 1754 in the Pennsylvania Gazette, and are available for approximately $4,000. His legal writing sells for up to $9,000, depending on the age and condition of the paper.

Last, but certainly not least, there is Franklin's autobiography. This book is a classic of the genre and has, despite a very difficult initial publication history, been published many times over. The first edition, which appeared in French rather than English, was entitled Memoires de la Vie Privee de Benjamin Franklin (Chez Buisson: Paris, 1791) and is valued around $7,000. The earliest English editions, such as The Private Life of the Late Benjamin Franklin (J. Parsons: London, 1793), can fetch a similar amount.

Franklin, Benjamin. The Charters of the Province of Pensilvania and City of Philadelphia. B. Franklin, Philadelphia (1743). Printed and sold by Benjamin Franklin; text of Charters (7 pages) signed in type by William Penn; probably fewer than 200 copies printed.

Franklin, Benjamin. Gentlemans Magazine Volume XXII. Edward Cave, London (1752). Gentlemans Magazine Volume XXII, 1752; contains articles by Benjamin Franklin including: a letter to Peter Collinson dated Philadelphia, dated October 19, 1752, appearing in December 1752, andA new Hypothesis for explaining the Phenomena of Thunder, Lightning, and Rain, Being an Extract from B. Franklins Experiments and Observations on Electricity, Printed for E. Cave, and lately translated into French at Paris appearing in May (1752); indexed; engravings.

Franklin, Benjamin. New Experiments And Observations On Electricity. Printed for F. Newbery, London (1774). Full title: Experiments and Observations on Electricity, Made at Philadelphia in America. To which are added, Letters and Papers on Philosophical Subjects. The whole corrected, methodized, improved, and now first collected into one volume, and illustrated with copper plates; seven engraved plates, including frontispiece, and two fold-out; woodcut illustrations; advertisements; indexed.

Hutchinson, Thomas. The Letters of Governor Hutchinson and Lieutenant Governor Oliver. J. Wilkie, London (1774). Full title: The Letters of Governor Hutchinson, and Lieut. Governor Oliver, and, Printed in Boston, and Remarks Thereon. With the Assemblys Address, and the Proceedings of the Lords Committiee of Council. Together with the Substance of Mr. Wedderburns Speech Etc.; letters written by: Hutchinson, Oliver, Franklin, Auchemuty, Rogers, Mauduit and others; believed to have been edited by Israel Mauduit.

Franklin, Benjamin. La Science Du Bonhomme Richard, ou Moyen Facile De Payer Les Impots.. Ruault, Paris (1777). Translated from English by Francois A. Queta; contains: the examination of Dr. Franklin before the British Parliament in 1766, translated by Dupont de Nemours; the Constitution of Pennsylvania, as established in 1776, translated by Louis Alexandre Duc de la Rochefoucauld d'Enville and reprinted from Affaires de l'Angleterre et de l'Amerique, and the examination of Mr. Penn, at the bar of Parliament in 1776, translated by M.M. Quetant and Lecuy

Franklin, Benjamin. The Private Life of the Late Benjamin Franklin. Printed for J. Parsons, London (1793). Full title: The Private Life of the Late Benjamin Franklin, LL.D. Late Minister Plenipotentiary from the United States of America to France. Originally Written by Himself, and Now Translated from the French; title page:To which are added some account of his public life, a variety of anecdotes concerning him, by M.M. Brissot, Condorcet, Rochefoucault, Le Roy, etc. And the eulogem of M. Fauchet, Constitutional Bishop of the Department of Calvados, and a member of the National Convention; printed for J. Parsons.

Franklin, Benjamin. Works of the Late Doctor Benjamin Franklin. G.G.J. and J. Robinson, London (1793). Full title: Works of the Late Doctor Benjamin Franklin: Consisting of His Life Written by Himself, together with Essays, Humorous, Moral and Literary, Chiefly in the Manner of The Spectator; title page:Life of Dr. Franklin, as written by himself with a Continuation of his Life by Dr. Stueber and Extracts from his Will; preface by Richard Price; retranslation of the French translation by Gibelin; two volumes; first printing includes an errata slip in the first volume; engraved title page with vignette portrait of Franklin in both volumes.

Franklin, Benjamin. Works of the Late Dr. Benjamin Franklin. Samuel Campbell, New York (1794). Full title: Works of the Late Dr. Benjamin Franklin; Consisting of His Life, Written by Himself, Together with Essays, Humorous, Moral and Literary; Chiefly in the Manner of The Spectator; frontispiece engraving of Franklin; includes Franklin's self-authored epitaph:Here lies the body of Benjamin Franklin, Printer, (Like The Cover On An Old Book, Its Contents Torn Out And Stript of Its Lettering And Gilding) Lies Here Food For The Worms; Yet The Work Itself Shall Not Be Lost, For It Will (As He Believed) Appear Once More, In A New And Beautiful Edition, Corrected And Ammended By The Author.

Bache, Benjamin Franklin. Truth Will Out!. B. F. Bache, Philadelphia (1798). Full title:Truth Will Out! The Foul Charges of the Tories Against the Editor of the Aurora Repelled By Positive Truth and Plain Truth and His Base Calumniators Put to Shame; disputed attribution, between Benjamin Franklin Bache, William Duane, and Philip Freneau; from The Aurora, 1798; also contains writings by: Michael Leib, Samuel M. Hopkins, William Lee and Mathew Carey.

Franklin, Benjamin. The Works of the late Dr. Benjamin Franklin. William Duane, Philadelphia (1809). Full title: The Works of Dr. Benjamin Franklin, in Philosophy, Politics, and Morals: Containing, Beside All the Writings Published in Former Collections, His Diplomatic Correspondence, as Minister of the United States, at the Court of Versailles; a Variety of Literary Articles, and Epistolary Correspondence, Never Before Published: With Memoirs and Anecdotes of His Life; compiled by William Temple Franklin; contains:Secret Correspondence with Congress,Miscellaneous Diplomatic Correspondence, andPolitical Essays and Correspondence Appertaining to the Revolution; six-volume set; engraved frontispiece portrait of Franklin; engraved title page; Volume IV published at Philadelphia by William Duane in 1809; Volume II half-title:American Politics Before the Revolution; Volume III half-title:Philosophical. Essays and Correspondence; pictorial title page; foldout mapA Chart of the Atlantic Ocean, Exhibiting the Course of the Gulph Stream, andc; contains 12 monochrome plates, 8 folding.

Franklin, Benjamin. Historical Review of Pennsylvania. E. Olmsted and W. Power, Philadelphia (1812). Full title: An Historical Review of Pennsylvania, from Its Origin, Embracing, Among Other Subjects, the Various Points of Controversy, Which Have Arisen, from Time to Time, Between the Several Governors and the Assemblies. Founded on Authentic Documents; authored by Richard Jackson under the direction of Benjamin Franklin; dedicated toArthur Onslow, Speaker of the House of Commons; author's statement:The Subject of the following Sheets is an unhappy one: The Controversy between the Proprietaries and successive assemblies of Pensylvania. In it are traced many of the grievances which finally led up to the War of Independence; illustrated with 2 plates; 500 copies sent by Franklin to America.

Franklin, Benjamin. The Works of the Late Dr. Benjamin Franklin. Oliver and Boyd, Netherbow (1812). Two volumes in one, each with frontispiece engraved plate engraved 1812 with publisher's name.

Franklin, Benjamin. The Private Correspondence of Benjamin Franklin. Henry Colburn, London (1817). Full title: The private correspondence of Benjamin Franklin, LL.D. F.R.S. andc., Minister Plenipotentiary from the United States of America at the Court of France, and for the Treaty of Peace and Independence with Great Britain, andc. andc. comprising a series of letters on miscellaneous, literary, and political subjects: written between the years 1753 and 1790; illustrating the memoirs of his public and private life, and developing the secret history of his political transactions and negociations; two volumes; handmade peacock marble endpapers; 4 pages of advertisments; Volume I contains a fold-out facsimile letter, in Franklin's handwriting, to Strahan:You are my enemy and I am yours, Benjamin Franklin.

Franklin, Benjamin. Memoirs of Benjamin Franklin. McCarty and Davis, Philadelphia (1834). Full title: Memoirs of Benjamin Franklin: Written by Himself, and Continued by His Grandson and Others; with His Social Epistolary Correspondence, Philosophical, Political, and Moral Letters and Essays, and His Diplomatic Transactions; preface signed W. D. (William Duane); two volumes; engraved title pages signed,G. Minor; engraved portrait of Franklin by Martin engraved by Geo. B. Ellis.

Franklin, Benjamin. The Works of Benjamin Franklin. G.P. Putnams Sons, The Knickerbocker Press, New York and London (1904). Full title: The Works of Benjamin Franklin. Including the Private as well as the Official and Scientific Correspondence. Together with The Unmutilated and Correct Version of the Autobiography, Compiled and Edited by John Bigelow; twelve volumes; 1000 numbered sets, 400Connoisseur's Federal Edition and 600 setsCollectors Federal Edition; each volume with a frontispiece and illustrated plates; embossed gilt portrait of Benjamin Franklin on upper board.

Franklin, Benjamin. The Way to Wealth. Random House, New York (1930). Designed and illustrated in color by Vojtech Preissig, with essay on Poor Richards Philosophy by Phillips Russell; written by Benjamin Franklin under the pseudonym Richard Saunders; 390 numbered copies, signed by the illustrator; with a note by Preissig on the printings and illustration; printed in a combination of linocutting and painting on a grained surface on J.W. Zander's hand-made paper; color frontispiece.

Franklin, Benjamin. The Memoirs of Benjamin Franklin. Arion Press, San Francisco (2006). Printed from photopolymer plates by letterpress; uses a nineteenth-century American typeface,Aitken, Binny and Ronaldsons Roman No. 1 (c. 1800), recreated digitally by Arion Press; with a keepsake that details the discovery and acquisition of Franklin's lost manuscript in Paris in 1867; 400 numbered copies; frontispiece portrait of Benjamin Franklin.