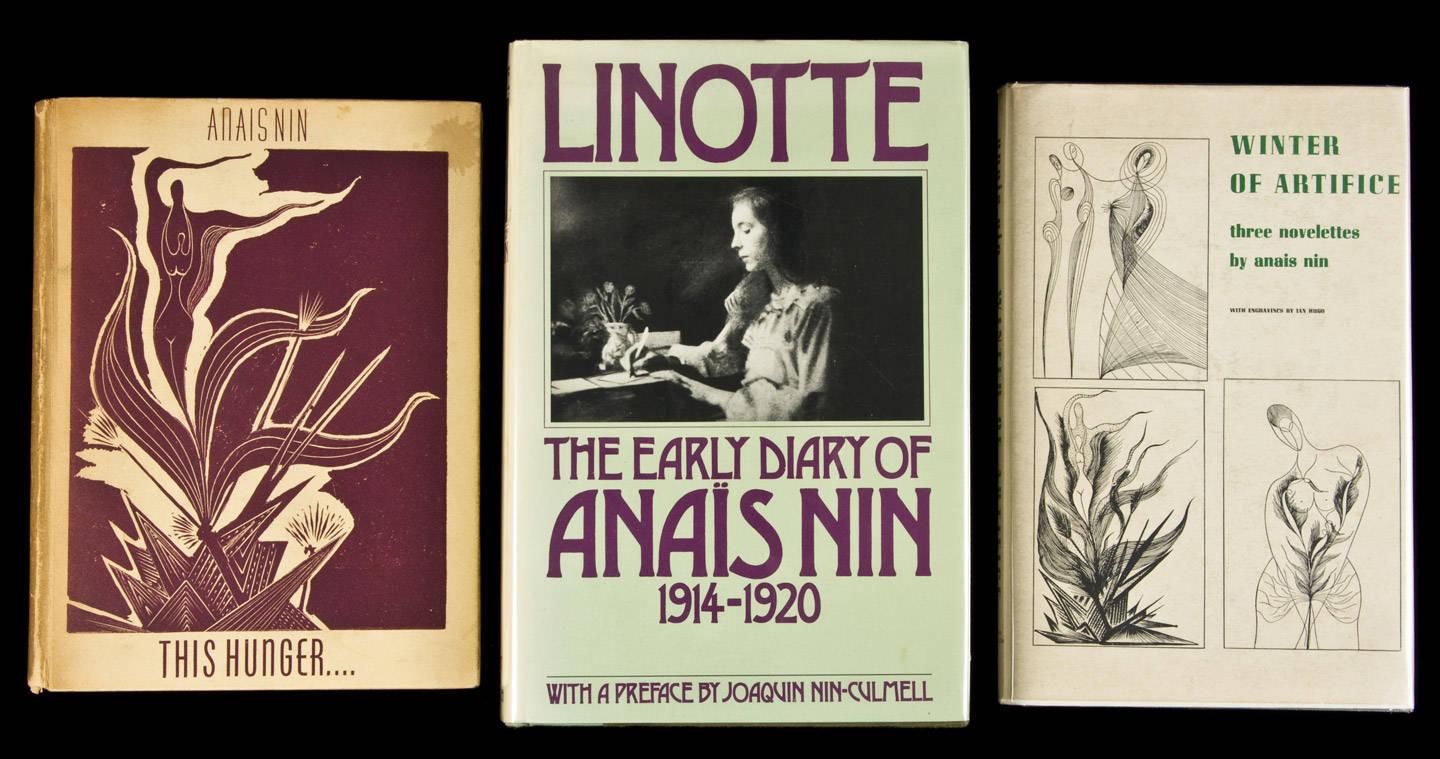 Anais Nin remains monumental in the world of feminist literature, not least because of her skill and dedication to her craft, but also because of the unique times and opportunities that she availed herself of. Herself a controversial figure, (like many of her male contemporaries, it must be said) Anais Nin led a whirlwind life of adulteries, parties, even bigamy! What is interesting for the collector is that she documented these exploits in extremely frank and lyrical detail; providing an insight into the lives of other greats of her age, as well as the expectations and society of the contemporary Moderns. Amongst her circle was the therapist Otto Frank, Henry Millar and his second wife June Miller, John Steinbeck, Antonin Artaud, and many other leading lights.

For the collector, Anais Nin's literary career provides a broad degree of possibilities, from her 'erotic chapbooks' in collaboration with Henry Miller (written as a part of a ghostwriting effort), to her candid and frank journals, or her landmark book: D.H. Lawrence: An Unprofessional Study. One of the joys of collecting Nin is that, due to the fact that her circle of literary friends was so vast, that there can still be found personalized monographs, inscriptions, and dedications to various figures. A Hardcover first edition of D.H Lawrence: An Unprofessional Study (Titus Press Paris, 1932) can be found for as little as $350 at auction, used, whereas if it contained slipcase or original dustjacket, would be considerably more valuable.

For the dedicated Nin fan, On Writing, Nin's memoir of the writing life published by Daniel Oliver associates 1947 inscribed and in first edition 'white' cover could be worth as much as $700 at auction, with signature or dedication. Comparatively, the very limited edition pre-print of This Hunger (Gemor Press, New York, 1945) is worth upwards of $1000 - if it is indeed this early edition, and not the contemporaneous printing of a 1000 trade copies. This limited edition pre-print all holds wood-block prints by the artist Ian Hugo, and only fifty were every printed as gifts for friends and family. How do we know what edition copy you have? Happily, all of this fifty are inscribed, numbered, and dedicated by Nin herself and is in Octavo format.

If, however, you happen to obtain one of the larger trade print runs of This Hunger (Gemor Press 1945) then do not fear. The first 1000 copies in the print run, albeit not as rarefied as the first fifty, are also worth up to $500-$700 with personalized inscriptions.

Nin, Anais. ON WRITING. Daniel Oliver Associates, Hanover (1947). Total 150 copies printed; 50 were numbered and signed by Nin with and original drypoint by designer Bill Miller and meant for distribution among the DOA

Nin, Anais. Under a Glass Bell. E.P Dutton, New York (1948). Collection of 13 short stories by Nin; Contents: Houseboat / The Mouse / Under a Glass Bell / The Mohican / Je Suis le Plus Malade des Surrealists / Ragtime / The Labyrinth / Through the Streets of my Own Labyrinth / The All-Seeing / The Eye's Journey / The Child Born out of the Fog / Hejda / Birth

Nin, Anais. The Diary of Anais Nin. Swallow Press and Harcourt Brace and World, New York (1967). Edited and with a Preface by Gunther Stuhlmann.